How can apps help your company?

Wow, we’ve had a busy time recently! In the last month Fliplet has been used to produce a number of apps for clients in the finance, media, education and hospitality industries. During this process we have learnt a lot and I thought I’d share some of the benefits of apps our clients have found from developing their own.

If you take a large amount of data, put an engaging interface on it that is easy to use, users will enjoy browsing your data and you’ll convey more information. 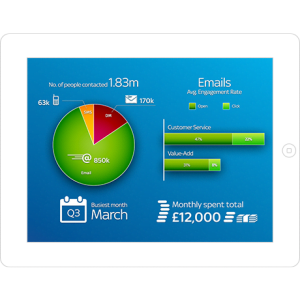 We recently developed an reporting tool for a client. It included a department’s performance data for each project over the last quarter. Typically this would have been presented as a report and a PowerPoint presentation which are both hard to make engaging or enjoyable to use.

The app we built included:

These features not only made the app fun to use but also made it stand out. It is also easier for the client to maintain than Powerpoint because they can update it via Fliplet’s online studio due to bespoke theme and plugin interfaces that ensure quick management of content and fast testing on the iPad.

2. Apps are becoming an expectation and are still a point of differentiation

When we meet with clients about new projects, almost all of them want to discuss mobile. It’s because it is the fastest growing digital channel and most people are spending as much time with mobile apps as they are their computers. Because of this, apps are also becoming a way to differentiate brands and digital products from competitors who aren’t producing apps yet.

I say yet because this differentiator will not last. As app development becomes more common and use of mobile and tablet devices becomes a feasible way for staff to work, apps will become as common as web sites and software on your computer. When this happens apps will no longer offer a way for companies to differentiate. Until then, apps are a great way to get a jump on competitors and stand out.

The idea of building a piece of software that runs on your computer is no longer appealing or deemed innovative, it is unlikely to achieve substantial uptake because it isn’t an expected way for companies to engage with their clients.

Apps, on the other hand, are being welcomed by a users as a mechanism for brands to communicate with clients. Apps are even allowed to track and direct messages to their clients opening an entirely new way for brands to talk to their customers!

But there is more to apps than just an easy distribution system. They also offer exciting new ways for brands to present themselves and engage their audience. 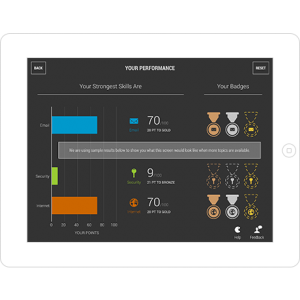 Recently we built a training app which covered email software which could be considered a fairly dry subject. To make the experience fun we made sure the questions were short so the users could move through them quickly. If the user did not know an answer then they were directed to engaging learning material and kept engage through a highly interactive interface. This simplicity and ease of follow-up meant learning became fun and engaging. We also included a game-like aspects such as a point system and awards when certain thresholds were met to ensure the app felt playful and encouraged the users to keep learning.

For the company presenting this app, they have been able to successfully differentiate themselves through an innovative app and created an engaging brand experience. They also demonstrated a strong understanding of apps to their peers and competitors.

Overall, apps can offer a number of benefits and open up new markets or help your company to stand out. This is just some examples but as time passes and more companies use apps the demand for innovation will increase. It’s going to be an exciting time for apps as customers expect more and companies try to keep up.

If you’re after a solution that enables rapid development and maintenance of engaging apps for iPad please have a play with Fliplet, our new product that has been designed for non-technical users to launch their own apps.